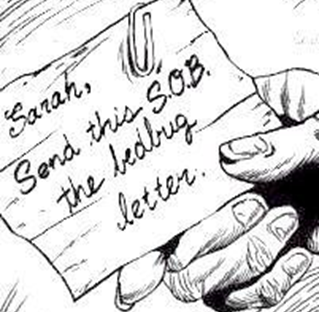 I first heard of the bedbug letter about 50 years ago – from Bob Brown, when we were undergrads at MSU.  In Bob’s story, the protagonist was P.J. Hill of the Great Northern . . . the Hill that Hill county is named after.  The Hill who was known as the “Empire Builder.”  Since the legend of the bedbug letter has made it into Snopes, here’s their version of the story Bob told:

Did a real event spark off this legend? Possibly. Folklore Jan Harold Brunvand reported on a 1992 letter from the corresponding secretary of the George Mortimer Pullman Encomium Society in which it was claimed the bed bugging took place on 4 March 1889 to a Mr. Phineas P. Jenkins, a salesman of pig-iron products. After spending a night in the company of far too many bedbugs (which in my book would number “one”), Jenkins penned a note of complaint to George M. Pullman, President of the Pullman Palace Car Company. In return, Jenkins supposedly received a wonderfully detailed and heartfelt apology from Pullman. Its effect was undermined, however, by the enclosure of his original letter, across which Pullman had handwritten “Sarah — Send this S! O! B! the ‘bedbug letter.’”

Thirty years later, Bob was Montana’s Secretary of State – and, when I read the following letter from Christi Jacobsen, I couldn’t help wondering if Bob had left a version of the bedbug letter in that office:

Perhaps Christi really did notice my sterling qualities in the certified letter I sent.  On the other hand, I wonder . . . did Bob leave his own version of the bedbug letter in Helena when he left the Secretary of State position . . . and did I just get my own personalized copy?

Want to tell us something or ask us a question? Get in touch!